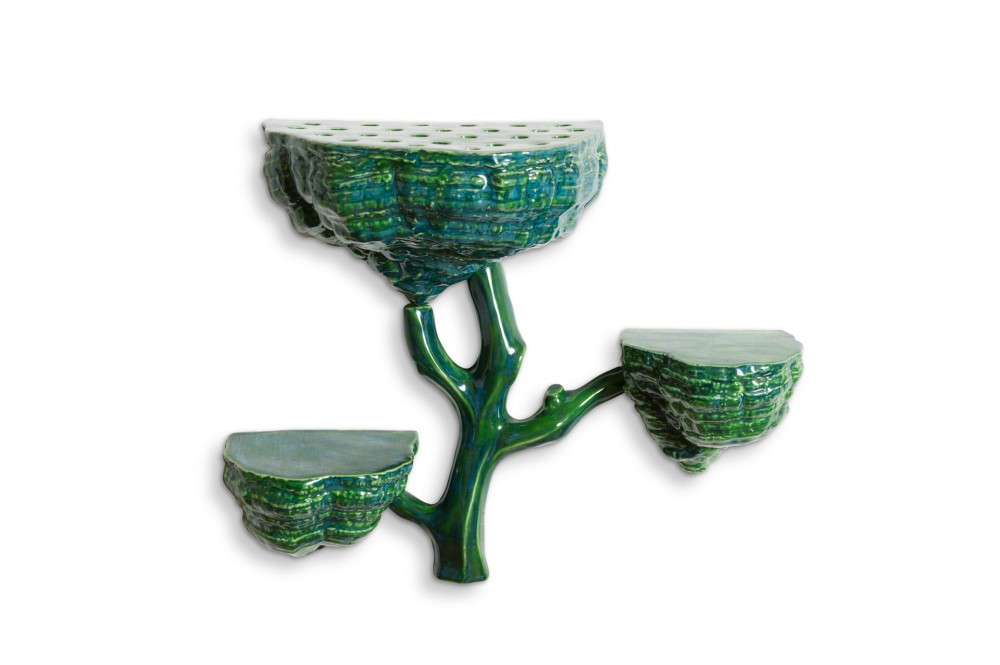 RaR is established in 2010 by two German artists: Beate Reinheimer and Ulrike Rehm. Reinheimer (1943) graduated at the Gerrit Rietveld Academy Amsterdam in 1972 and has given lectures on this Academy for more than 25 years. Her ceramic work has been exhibited all over the world and is included in the permanent collection of Boymans van Beuningen Rotterdam and Centraal Museum Utrecht. Rehm( 1976) graduated at the same Academy 25 years later and has finished her master study at the Sandberg Institute Amsterdam in 2011. Her work has been exhibited at Stedelijk Museum Amsterdam and Dutch Design Week Eindhoven.

Thomas Eyck commissioned RaR to design and produce a new wall installation in porcelain: “Hain”. The collection consists of three tall porcelain trees combined with ‘fungi’ and is glazed in half-transparant green. The fungi can be used as a display. The full series has been produced in a limited and numbered edition of 10. Three smaller sets are made in an edition of 99.
“Hain”, the poetic German word for “forest”, originated from the designers’ fascination for nature, art and architecture. This work combines the artistic structures of the flora, the 17th and 18th century Wunderkammer and the former use of consoles into a fascinating and magical object.

please click on the images below for more information about prices, sizes and delivery time
t.e. 134hain

The first and original set of 63 beetles , made in a numbered edition of 10 sets.

Several sets where sold to musea around the world and private art collectors.
t.e. 099read more